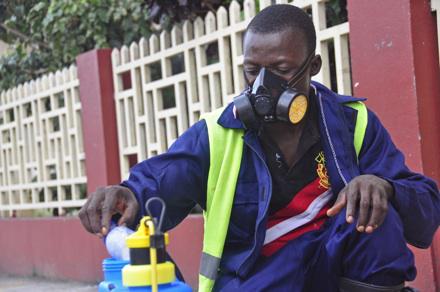 An employee of the Monrovia City Corporation mixes disinfectant before spraying it on the streets in a bid to prevent the spread of the deadly Ebola virus, Monrovia, Liberia, on Friday.

There is a very low risk of the deadly Ebola virus reaching Greece but experts here have been monitoring the outbreak, the Hellenic Center of Disease Control and Prevention (KEELPNO) said on Friday.

More than 1,300 people in West Africa have died after contracting Ebola, and the World Health Organization (WHO) admitted yesterday that the disease is spreading faster than efforts to control it.

If the situation continues to deteriorate, the consequences can be catastrophic in terms of lost lives but also severe socio-economic disruption and a high risk of spread to other countries, said Margaret Chan, WHO director-general.

KEELPNO warned Greeks who plan on traveling abroad to inform themselves about the disease and its symptoms.