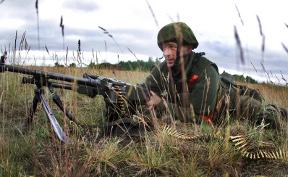 A Lithuanian soldier takes part in a field training exercise during the first phase of Saber Strike 2014 at the Rukla military base in Lithuania on June 14th. Saber Strike, a NATO exercise that will span multiple locations in Latvia, Lithuania and Estonia, involves approximately 4,700 personnel from 10 countries. [AFP]

Large maritime and ground drills hosted this summer by Baltic countries were considered successes in strengthening military interoperability and promoting mutual understanding, confidence, and co-operation among forces and participating nations.

The exercises crowned a series of other drills conducted by allies in Eastern Europe.

Commanders stressed the benefits of the joint drills.

"BALTOPS is an evolving exercise. Over the years, I have seen it grow in size and complexity to provide realistic training in a dynamic environment. Our continued presence, as an international force, is a clear demonstration of our commitment to regional stability and to each other," US Rear Admiral Richard Snyder, BALTOPS 2014 commander, told SETimes.

The training agenda provided participants with numerous opportunities to operate together and to develop productive relationships across several areas of expertise to include air, surface, subsurface and mine warfare. The exercise enabled participants to advance information...