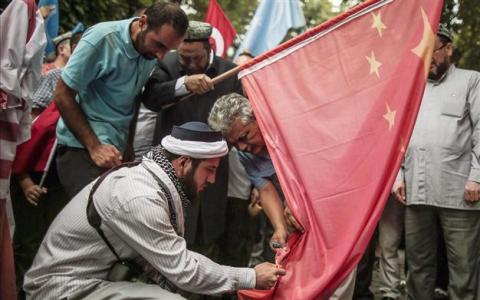 Uighurs living in Turkey prepare to set on fire a representation of a Chinese flag outside the Chinese consulate in Istanbul, Aug. 2 as they stage a protest to condemn the killings of Uighurs allegedly killed by Chinese security in China's far-western Xinjiang Uighur Autonomous Region. AP Photo / Emrah GÃ¼rel

Almost 100 people were killed during attacks on a police station and government offices in Chinaâs far western region of Xinjiang early last week, state media said Aug. 3, giving fresh details on one of the worst incidents of unrest in years.

The official Xinhua news agency said 59 âterroristsâ were gunned down by security forces in Shache county in Xinjiangâs far south, while 37 civilians were killed in the attacks on July 28.

State media had reported the incident a day later, saying dozens of people had been killed when knife-wielding attackers had staged assaults in two towns in the region.

It is unclear why the government waited so long to announce detailed casualties, though bad news has sometimes been covered up or delayed in the past.

âPolice confiscated long knives, axes as well as the terroristsâ banners that exhorted âholy warâ,â Xinhua said. Xinjiang, home to the Muslim Uighur people, who speak a Turkic language, has been beset for years by violence which the government blames on Islamist militants or separatists who it says want an independent state called East Turkestan.

The attack took place at the end of the holy month of Ramadan, which officials had tried to get Muslims in Xinjiang to ignore, in an indication of what rights groups say is discrimination targeting the Uighurs.

Hundreds have been killed in Xinjiang in the past year and a half, and the last week saw a series of deadly incidents, including the murder of a prominent pro-government imam at a major...