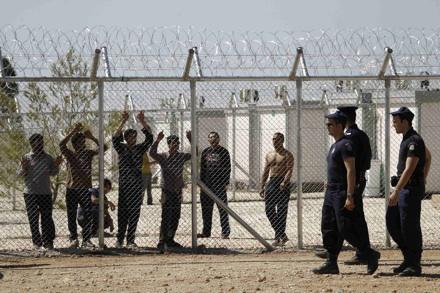 Police officers are seen patroling a detention center for immigrants in the Amygdaleza suburb of western Athens, in this file photo.

In July the number of deportations fell to 248, still a 41 percent increase over 2013 when authorities removed 175 people.

We are trying to raise the rate of deportations... mainly because holding centers in Attica have reached their capacity limit, a police source that wished to remain anonymous told Kathimerini.

About 2,500 migrants are currently held at detention facilities in Amygdaleza, Elliniko, Maroussi and the Aliens Buraeu headquarters on Petrou Ralli Street in Athens. An estimated 500 are in confinement across Atticas police centers.

Officials say that the spike was a result of accelerating the repatriation process for migrants from North African states such as Libya, Egypt and Algeria.

However, most of the people being sent back were forced to return to Albania, Pakistan, Algeria, Egypt and Georgia.

In addition, a total of 434 migrants left in July via a voluntary program conducted with the help of the local branch of the International Organization for Migration. About 8,500 migrants are expected to return to their home countries using the scheme.