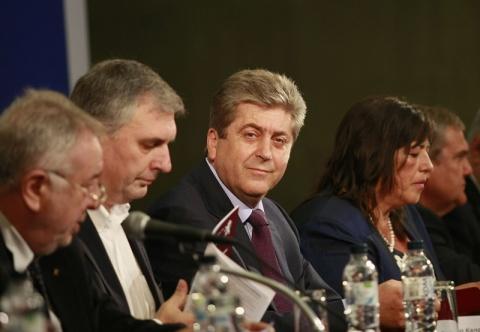 President (2002-2011) Georgi Parvanov at a conference of his ABV party. Photo by BGNES

Bulgarian President (2002-2011) Georgi Parvanov is to table his plans for a nationwide poll on changes to the political system, the institutions and the judiciary.

He outlined his proposals at a conference of his Alternative for Bulgarian Revival (ABV) was stage on Sunday.

Parvanov, who was expelled from the Bulgarian Socialist Party (BSP) after restating his political ambitions earlier this year, told private national channel bTV briefly after the event that Bulgaria's parliamentarism was worn-out as its sense had been "depleted".

"I must say, as there have been implications that "those at ABV are doing it because of Plevneliev": we demand a presidential republic not because of, but in spite of the current president," the Bulgarian National Radio quoted Parvanov as saying.

The former President has long pushed for a poll offering citizens to have their say on that matter.

Another key proposal envisages that half of the MPs should be elected using majority rule. ABV would also like to introduce progressive taxation and to introduce threefold cuts to party subsidies.

Parvanov has called for an end to "party appointments", party quotas at governing bodies and ministries.

Commenting on the issue of referendums, he also spoke of recent developments involving the deal with US-based Westinghouse on expanding Kozloduy NPP's capacities.

Last week's agreement between Sofia and Westinghouse followed a referendum in January 2013 in which citizens were to decide whether Bulgaria's nuclear capacities should be boosted. A majority voted in favor, but the poll was non-binding for Parliament due to low voter turnout.

The referendum was initiated by the then-opposition BSP and was perceived to be...