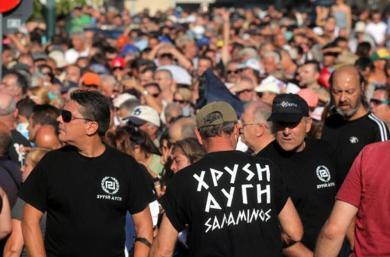 The Golden Dawn case file is making its way to the public prosecutor who will recommend to judges what charges the 78 suspects identified in the probe should face.

Magistrates Ioanna Klapa and Maria Dimitropoulou have completed their investigation and forwarded the details to prosecutor Isidiros Dogiakos. He will now examine the case file before making his proposal to a council of appeal court judges.

The judges will decide what charges the suspects, including 18 MPs elected to represent Golden Dawn in Parliament, will face in court. It is expected that the trial will begin towards the end of the year.

The case file includes more than 200 statements from witnesses, some of whom have been placed under protection. Thirty of the suspects, including Golden Dawn leader Nikos Michaloliakos, are in pre-trial custody.