Obama: 'Russia doesn't make anything,' West must be firm with China 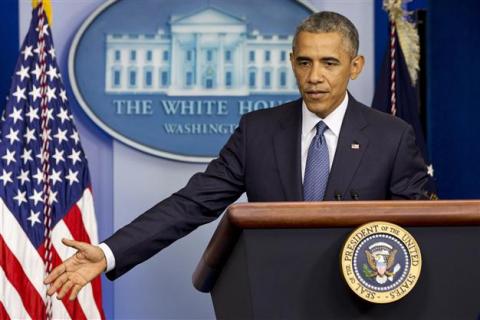 Obama also said he believes trade tensions will ease when China shifts âfrom simply being the low-cost manufacturer of the worldâ and its companies begin making higher-value items. AP Photo

President Barack Obama dismissed Russia as a nation that "doesn't make anything" and said in an interview with the Economist magazine that the West needs to be "pretty firm" with China as Beijing pushes to expand its role in the world economy.

Obama has tried to focus U.S. foreign policy on Asia, a response to China's economic and military might. But for months, that "pivot" has been overshadowed by a flurry of international crises, including Russia's support for separatists in eastern Ukraine.

Obama downplayed Moscow's role in the world, dismissing President Vladimir Putin as a leader causing short-term trouble for political gain that will hurt Russia in the long term.

"I do think it's important to keep perspective. Russia doesn't make anything," Obama said in the interview.

"Immigrants aren't rushing to Moscow in search of opportunity. The life expectancy of the Russian male is around 60 years old. The population is shrinking," he said.

Speaking of Russia's "regional challenges," Obama said in the interview: "We have to make sure that they don't escalate where suddenly nuclear weapons are back in the discussion of foreign policy."

China is engaged in territorial disputes with its neighbors in the oil-rich...