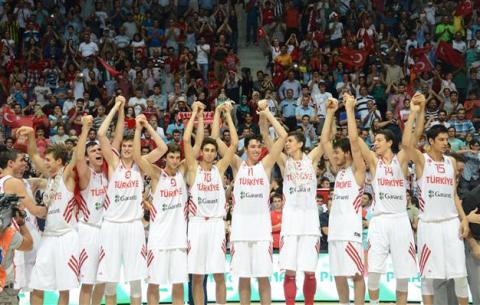 Host Turkey beat Serbia 85-68 to win the U-18 European Basketball Championship on Aug. 3 in the Central Anatolian province of Konya.

The victory in Konya followed Turkeyâs U-20 European Championship victory over Spain last month.
On Aug. 3, Egemen GÃ¼ven, who poured in 12 points in the final, was named the most valuable player of the tournament.

âWinning the MVP is nice but most important is winning the gold medal. And we played like a team,â said GÃ¼ven.

Turkey defended its gold medal while also claiming their sixth U-18 medal to go along with 2004 and 2005 silvers and bronze in 2009 and 2011. It had been 26 years since a team defended their U-18 European Championship title and four years since a host nation won the crown in front of their home fans.

GÃ¼ven led the Turks in scoring with 13.8 points per game, in addition to 6.9 rebounds and 1.8 blocked shots while shooting 61 percent from the field.

His top game probably came against Spain in which he collected 21 points, 18 rebounds and five blocks, though he had 28 points, 10 rebounds and three blocks against Montenegro as well.

In the gold medal game against Serbia, GÃ¼ven made all five of his shots from the field and two-of-three free throws for 12 points to go with two rebounds and three blocks.

But coach Ãmer UÄurata acknowledged that it was a team effort that...