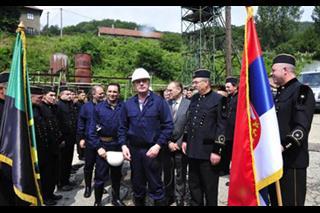 SENJSKI RUDNIK - Serbian miners Wednesday marked Miners’ Day, a holiday that has been established to commemorate a great miners' strike that took place at the Senje Mine (Senjski Rudnik), the first and oldest mining pit in Serbia, now part of RMU Rembas, on August 6 in 1903.

Vucic thanked miners for “the enormous efforts” they were making by doing the most difficult job in the world, stressing that however much their material position improved, it was still not enough.

Ministers Antic and Vulin visited miners at the Senje Coal Mine in Senjski Rudnik, a village in the Despotovac municipality in eastern Serbia, which is run by the Public Company for Underground Coal Exploitation Resavica (JP PEU Resavica).

Together with the director of that enterprise and of the Senje Coal Mine, they went 160 meters deep into the shaft of the mine to see first-hand the working conditions of the miners who had been promised that the Serbian government would do everything it could to improve the situation in the country's mining industry.

Stressing that the miners are doing a very difficult job, Antic said that they deserved special gratitude for doing everything to compensate as much as they could for the quantities of coal Serbia was lacking after the May flooding had damaged some of the most important mines in the country.

The energy minister said that restructuring JP PEU Resavica and RTB Bor, a copper mining and smelting complex located in Bor, eastern Serbia, were top priorities at the moment.