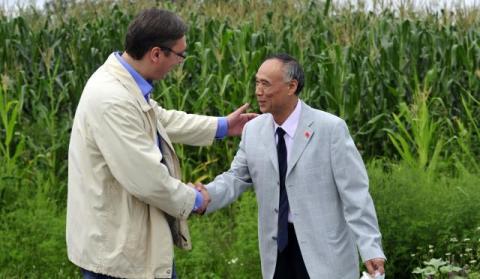 UB -- Serbian Prime Minister Aleksandar Vučić announced on Friday that he will travel to China on September 10.

He at the same time "expressed the hope of signing several important agreements and contracts with Chinese partners," Tanjug reported.

“I spoke with the ambassador of China to Serbia about preparing several important agreements and contracts that would make Serbia stronger, more powerful and more important in terms of infrastructure,” Vučić told reporters in the town of Ub.

Vučić and Chinese Ambassador Li Manchang attended the beginning of the works on the section of future Corridor 11 highway from Belgrade to the border with Montenegro.

The prime minister said that many people in Serbia will be surprised at the importance of the agreements contracts that will be signed in Beijing.

The Chinese diplomat noted that the Serbian government is "hard working, efficient, capable and responsible, and that for this reason, the Chinese side must honor all deadlines.

Pointing out that China's Shandong Hi-Speed, which is working on the project, will next year enter the list of 500 leading global companies in its field, Li said that it was already the leading highway construction firm in its country.

China is the fifth foreign trade partner of Serbia and it makes it one of the most important of its partners and financiers, Tanjug said in its report.

According to the National bank of Serbia, China's investments in Serbia from 2005 to 2013 "totaled about EUR 20 million," the agency said.

According to the Serbian Chamber of Commerce, economic cooperation between the two countries lags behind political...