Bulgaria's Socialist Party May Run in Elections Under New Name 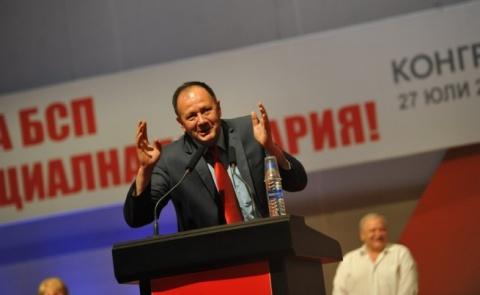 Photo of the newly elected Chair of the socialist party Mihail Mikov. Photo by BGNES.

Bulgarian socialists may run in the upcoming elections under the name BSP – Left Bulgaria, instead of the former Coalition for Bulgaria.

During Friday's plenum socialists introduced changes to the party's leadership. Krasimir Yankov, Borislav Gutsanov and Emil Kostadinov will all be replaced by Zahari Georgiev, MP from Coalition for Bulgaria in the 42th National Assembly, Nova Tv informed.

Former chair of the Bulgarian Socialist Party Sergey Stanishev will not be a part of the leadership of the future BSP - Left Bulgaria coalition. Instead, he is to head the party's Consultative Board, Dnevnik.bg reported.

The plenum began with a speech by the newly-elected party leader Mihail Mikov, who leveled criticism at President Rosen Plevneliev regarding the “clear attempts to interfere with the political life.”