Turkey Votes for President for First Time in History 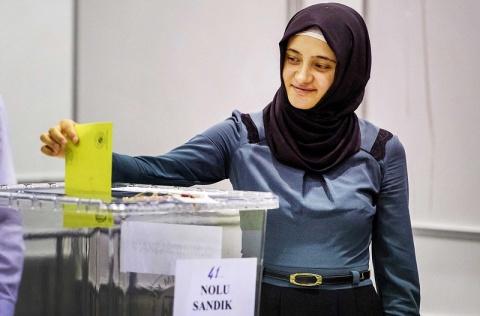 A Turkish woman who lives in the Netherlands casting her ballot in the presidential elections on July 31. Turks living abroad voted earlier, with preliminary results reporting a low turnout. Photo by EPA/BGNES.

Millions of Turkish citizens are casting ballots on Sunday in the country's first direct presidential elections.

Some 53 million people are eligible to vote for a head of state to take over from Abdullah Gul, whose seven-year term expires on August 28.

Three options are offered in the polls, and Prime Minister Recep Tayyip Erdogan is also a contender.

Erdogan is seeking to boost powers of the head of state and does not conceal his ambition to introduce a presidential system in Turkey, a country where this is currently a largely ceremonial office.

He has been Turkey's Prime Minister three times in a row and cannot aspire for another term due to internal party restrictions.

"Maybe this is my last rally as prime minister and AK Party chair. This is not a farewell. This can only be a farewell to the old Turkey," Hurriyet Daily News quoted him as telling a crowd of supporters on Saturday, when he held his last campaigning event.

Other candidates are the Organization of Islamic Cooperation (OIC)'s former Secretary-General Ekmeleddin Ihsanoglu and Kurdish politician and lawyer Selahattin Demirtas.

The move was widely perceived as an attempt of the two parties to offer a "moderate Islamic" candidate to appeal to conservative voters whose support Erdogan has managed to draw over the past decade.

The OIC ex-Chairman chose bread ("ekmek" in Turkish, but also sounds like his first name) as a key symbol of his campaign. He told CHP members on Saturday that "the votes of the quiet masses will boom tomorrow and 'ekmek' will come out of the ballot...