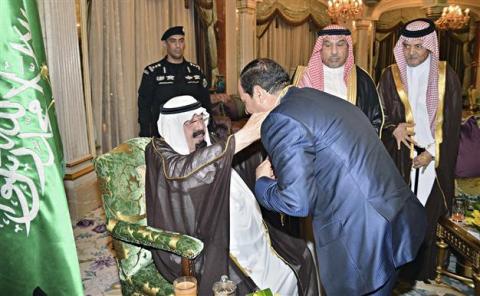 The leaders of the Arab world's most populous state and its richest state met on Sunday to talk over joint efforts to counter Islamist militancy across the Middle East, including the turmoil now shaking Iraq.

President Abdel Fattah al-Sisi of Egypt and Saudi Arabia's King Abdullah are sworn enemies of the Muslim Brotherhood. They see the recent success of militants in Iraq as a threat to their stability and undermining security in the region.

Sisi's spokesman, Ehab Badawi, said the two leaders agreed to work together promote the "true and moderate values of Islam that reject extremism and terrorism".

"President Sisi and King Abdullah also reviewed the development of the situation in Iraq in light of the expanding of the circle of terrorism in the region," Badawi said, according to Egypt's Middle East news agency.

"There is no doubt that the meeting between the leadership of the two countries is important in light of the current circumstance of the Arab and Muslim nation," Saudi Foreign Minister Prince Saud al-Faisal said, according to state news agency SPA.

"(There are) external wars, intervention from foreign powers, internal sedition and disputes within the Arab nation at a time when it is in utmost need for solidarity and to stand together as one man to repel the enmities," he said.

The visit is Sisi's first since his election to the presidency this year. The pair met on King Abdullah's plane in Cairo in June, and Riyadh regards the former Egyptian army leader as one of its closest regional allies.

Saudi Arabia, along with Gulf Arab allies Kuwait and the United Arab Emirates, have provided some $20 billion in aid after Sisi ousted Islamist President...