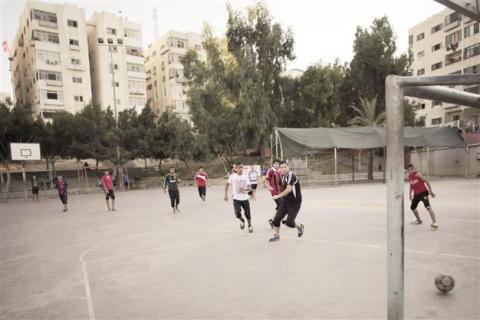 Palestinians play football in a park during a temporary cease-fire in Gaza on Aug 5. Qatarâs involvement in the issue raises doubts over the 2022 World Cup.

Israel voices rejections over Qatarâs policy regarding the deadly conflict in Gaza, targeting the countryâs hosting of the 2022
FIFA World Cup Qatarâs hosting of the 2022 World Cup has emerged as the latest target of an undeclared alliance between Saudi Arabia and Israel that with the war in Gaza has sharpened political fault lines in the Gulf as a result of Qatarâs support for the Muslim Brotherhood, Hamas and other groups inspired by political Islam.

A spate of reports in Israeli and international media seeks to link Qatarâs strategy to position itself as a global football power house with efforts to infuse young players being educated and trained at its Aspire Academy for Sports Excellence with precepts of militant Islam. Aspire sponsors a talent scouting program that puts some 500,000 youth a year through trials in 16 countries in Africa, Asia and the Americas, 20 of which are selected for training at its academies in Doha and Dakar, Senegal.

The reports further seek to discredit Qatarâs role as one of two countries alongside Turkey that have played an important role in international efforts to achieve a cease-fire in Gaza because of their relationship with Hamas, a group that is shunned by the United States and the European Union, who view it as a terrorist organization. The reports charge that beyond financial support and hosting Hamas leaders in Doha, Qatar is involved in helping Hamas build a military infrastructure.

The reports come against the background of a war of words between Israel and Qatar and condemnations by Saudi Arabia and other Arab states of Israelâs assault on Gaza that ring hollow in the absence of any real Arab effort to achieve a halt to the...