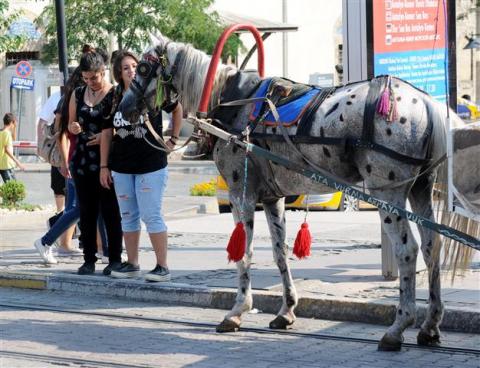 Around 15 horse-drawn carriages start at noon and are ridden until midnight in the city, one of the hottest places in Turkey in the summer. DHA Photo

Horses forced to work 14 hours every day in the Mediterranean town of Antalya have been painted with oil to hide their poor conditions, stirring public outrage from animal rights activists.

Around 15 horse-drawn carriages start at noon and are ridden until midnight in the city, one of the hottest places in Turkey in the summer. The coach horses mostly serve local and foreign tourists visiting the historic neighborhood of KaleiÃ§i.

But the heavy work schedules have prompted their conductors to find a deceptive way to make the horses look presentable, instead of allowing them to rest.

The practice has prompted the Antalya Bar Associationâs animal rights council to file a criminal against the conductors of the coach horses for making them work excessive hours, leaving them to extreme temperatures outdoors, as well as using carcinogenic paint on them.

Lawyer Lider TanrÄ±kulu explains that the horses work at least eight hours every day and this can even go up to 14 hours. âConsidering Antalya heat, any work over eight hours for these carriages is tortureâ TanrÄ±kulu said.

He also warned the paint composed of carcinogenic chemicals could cause cancer and the animals to die in the long run, adding making animals work beyond their capacity could be considered abusive with respect to the law on the protection of animals.

âForcing actions that are beyond the animalâs capacity requires this situation to be considered as a crime.â

Similar complaints have been voiced concerning Istanbulâs Princeâs Islands, where coach horses have been a long-iconic...