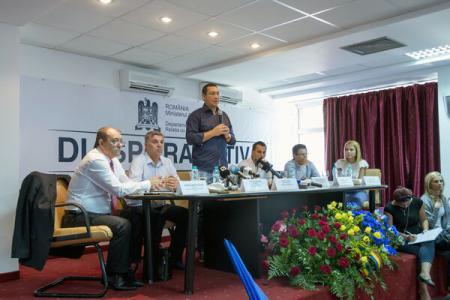 Prime Minister Victor Ponta said in opening remarks to the Diaspora Estival (The Summer of the Diaspora) Programme in the Black Sea resort of Eforie Nord on Monday that the image of Romania in countries like Britain and Italy also depends on the Romanians who go there and on what they say about their country.

'From my point of view, there are two challenges we must think of. Our concern focuses on what we are doing for the Romanians across Europe, first and foremost, since it is there that the largest [Romanian] communities are (...). I think it is crucial to pursue with the effort we are making for the Moldovan citizens to really be European Union citizens. We must think of the [Romanian] communities in Serbia, Ukraine, Hungary. The second priority is related to the Romanians living in the European Union states, where a populist rhetoric and chauvinistic attitudes have emerged against the backdrop of a deteriorating economic situation. It is happening in Italy, in Britain', Ponta stressed.

He underscored a positive propaganda should be made in those countries for Romania and for the Romanians' role in Europe, instead of promoting a rhetoric about the problems of Romania.

'We can do more in this respect if we manage to understand that the biggest enemies of Romania are, after all, the Romanians. If we go [to another country] and say Romania is a bad country, a country of criminals, of thieves, it is only natural that such rhetoric be embraced at a certain moment. I have tried to say everywhere in Europe that we shall never accept legal discrimination against Romanians and Romanians always bring something extra to those countries they settle in and pay taxes and help developing those countries. We must make positive propaganda...