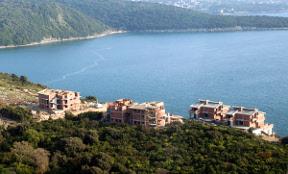 Tourism has increased by 5 percent this year in Montenegro, with much of the increase attributed to visitors from Ukraine. [AFP]

Unrest in Crimea and eastern Ukraine is causing many to holiday in Montenegro.

Montenegro is seeing an unexpected result from Russia's illegal annexation of Crimea -- the percentage of Ukrainian tourists visiting Montenegro's scenic spots since March has increased as people on holiday look for an alternative to Crimea.

About 100,000 tourists visited Montenegro for the past five months, which is 5 percent more than the previous year, but the biggest surprise in numbers is related to Ukrainian tourists. According to state's agency for statistics, the number of Ukrainian tourists increased by 124 percent compared to last year.

Bohdana Orynenko, 37, a teacher of fine arts in Kyiv, is spending the summer in the coastal town of Budva.

"My daughter and husband are here with me, but my entire family is in Ukraine, in various parts of the country. I am afraid for their lives. We listen to the news every day. It's not good. The international community should take some serious steps in order to stop the violence in our country," Orynenko told SETimes.

From official point of view, the number of tourists from Ukraine is increased because of the crisis. The refusal of many not to go to Crimea is a demonstration of patriotism by Ukrainian people, officials say.

"The Russian occupation of the Crimea turned this fantastic region to a disaster zone, without water, food, with lots of weapons, soldiers and Russian Cossacks who behave as bandits. In this situation Ukrainians don't want to visit Crimea. They are afraid of different provocations and repressions towards them because of speaking Ukrainian language," Volodymyr Tsybulnyk, chief charge d'affaires of the Ukrainian...