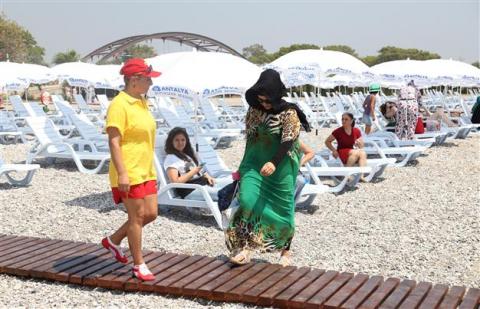 Female and male protesters are planning to swim together at Antalyaâs SarÄ±su beach to protest its recent transformation into a womenâs only beach.

The beach was converted into a free-of-charge, womenâs only beach and opened with a ceremony on Aug. 16 by Antalya Municipality.

Members of the Antalya Peopleâs House (Halkevi) and an affiliated organization, the Studentsâ Collective (ÃÄrenci Kolektifi), at Akdeniz University will hold a picnic at the beach on Aug. 24. They will also dance the âhoron,â a folk dance of the Black Sea region, in reaction to a statement by a Samsun mufti who said it was religiously impermissible for men and women to dance the horon together.

Ayten Ceyhan, the head of the Antalya Halkevi, said the womenâs only practice would result in gender apartheid.

âThey are not only opening womenâs only beaches. Statements triggering gender apartheid are being made across Turkey,â she said, referring to the Samsun muftiâs remarks over the horon.

âI suggest that rapes and violence against women should be prevented with deterrent laws instead of separating women and men,â she said.

Mayor Menderes TÃ¼rel of the ruling Justice and Development Party (AKP) previously said the move was âa necessity to serve all citizens for whom the Constitution stipulates affirmative action,â adding that the municipality had recently transformed KonyaaltÄ±, another beach in the province, into a free-of-charge beach adapted for the use of people with disabilities.

The mayor also recalled that there were womenâs only beaches in Antalya in the 1930s when the Turkish Republicâs founder, Mustafa Kemal AtatÃ¼rk, was...