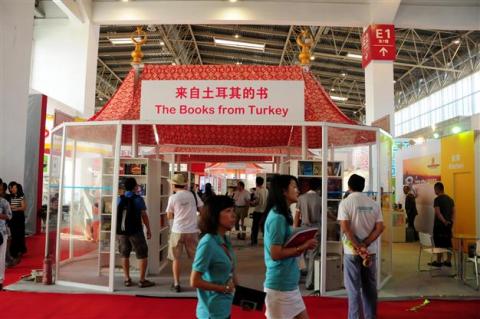 The 21st Beijing International Book Fair opened today at an event attended by Turkish Culture and Tourism Deputy Minister Abdurrahman ArÄ±cÄ±. Turkey is the guest of honor this year at the fair. ArÄ±cÄ± said Turkey will be represented in three different pavilions, covering an area of 932 square meters.

He said nearly 3,000 books from Turkey will be presented at the fair, which includes a special place for children and youth publications. He said nine copyright agencies, backed by the Culture and Tourism Ministry, will give professional talks during the fair.

ArÄ±cÄ± noted China was the guest of honor at the Istanbul Book Fair last year and that Beijing invited Turkey this year. He said their prior goal was to host 100,000 Chinese citizens in Turkey and that they had reached 138,000 people.

He said they also wanted to make use of Chinaâs 50-foreign film quota by including at least three Turkish films.

The fair will also include performances of the traditional arts of calligraphy, illumination and marbling, ArÄ±cÄ± said, adding that a team of 120 authors, academics, publishers and artists will be attending panels and giving presentations.

The fair will also provide an opportunity to promote Turkeyâs T.E.D.A. Project, known as the Translation Support Program, which the ministry initiated in 2005.