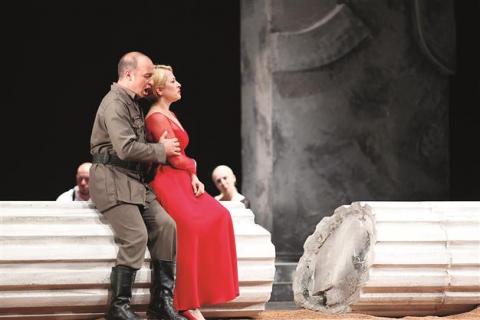 Tthe festival will bring together Turkish and foreign artists and groups in the extraordinary acoustics of the historic Aspendos Theater.

So far, the festival has brought together many Turkish and foreign artists and groups in the extraordinary acoustics of the 2,000-year-old Aspendos Theater.

This year, the festival will host Ä°zmir, Mersin, Antalya, Ankara and Antalya opera and ballet directorates, as well as foreign guests including the Budapest Operetta and Musical Theater and Italian Taormina Festival Opera.

The opening of the 21st International Aspendos Opera and Ballet Festival will be held by Giuseppe Verdiâs opera âAidaâ on Aug. 30. The work will be staged by the Ä°zmir State Opera and Ballet.

The opera tells the story of an Ethiopian princess Aida, who was captured and enslaved by Egyptians. An Egyptian military commander, Radames, struggles to choose between his love for her and his loyalty to the pharaoh. To complicate the story further, the Pharaohâs daughter Amneris is in love with Radames, although he does not return her feelings.

The festivalâs second guest will be the Mersin Opera and Ballet on Sept. 3 with âNotre Dame de Parisâ by Cesare...