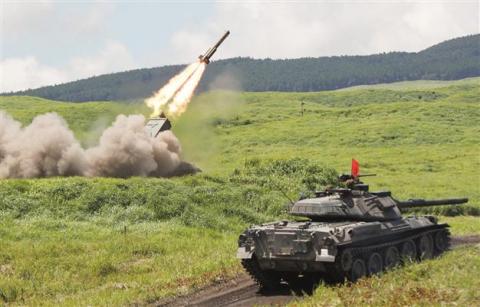 In this file photo, an anti-land mine missile is launched during an exercise by Japanese forces at the Higashi Fuji training range in Gotemba, southwest of Tokyo.

Japanâs Defense Ministry makes its biggest ever budget request, as Tokyo bolsters its military amid worries over Chinaâs expanding naval reach Japanâs defense planners are seeking their biggest budget ever for the coming fiscal year to pay for stealth fighters, drones and a hi-tech submarine, as Prime Minister Shinzo Abe bolsters the military amid an intensifying rivalry with China.

The Defense Ministry on Aug. 29 requested a 3.5 percent increase to 5.05 trillion yen ($48.7 billion) for the year starting next April. If approved, this third increase in a row will more than reverse the decade of cuts that Abe ended after coming to office in December 2012.

The hawkish premier, taking a more assertive stance on national security, has also ended a ban on Japanese soldiers fighting abroad and eased curbs on weapons exports. By testing the constraints of Japanâs pacifist postwar constitution, Abe has angered some neighbors, especially Beijing, which accuses him of reviving the nationâs wartime militarism.

Japan, in turn, is wary of the rapid military buildup in China, which has overtaken Japan in recent years as the worldâs second-biggest economy. Beijingâs military budget has jumped fourfold over the past decade to 808 billion yuan ($132 billion), nearly triple Japanâs.

In recent years, Sino-Japanese tensions have ramped up over the ownership of a group of uninhabited islets in the East China Sea. Patrol ships and military planes from both countries now routinely shadow each other in the area.