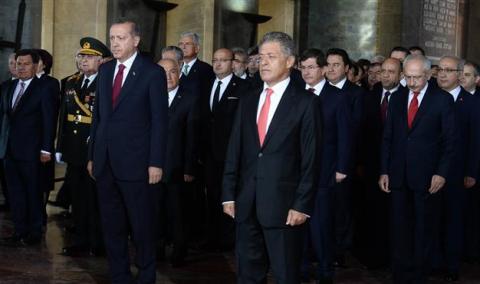 Turkey is celebrating the Victory Day on Aug. 30, marking the 92nd anniversary of the Turkish victory against Greek forces at the Battle of DumlupÄ±nar, the final battle of the War of Independence.

The celebrations began with an official ceremony at AnÄ±tkabir, the mausoleum of Mustafa Kemal AtatÃ¼rk, the founder of the Republic of Turkey, which was attended by political leaders and military commanders.

Main opposition Republican Peopleâs Party (CHP) leader Kemal KÄ±lÄ±Ã§daroÄlu also attended the ceremony although his party boycotted ErdoÄanâs oath-taking ceremony in Parliament on Aug. 28. However, KÄ±lÄ±Ã§daroÄlu did not attend the program at the Ãankaya Palace following the visit to AnÄ±tkabir, while Nationalist Movement Party (MHP) leader Devlet BahÃ§eli preferred to skip the entire program in Ankara and join the celebrations in Afyon.

President ErdoÄan left a wreath on AtatÃ¼rk's Mausoleum and the group observed a minute's silence afterwards, which was followed by the recitation of the Turkish national anthem.

ErdoÄan will later attend a military parade and host a reception at the Ãankaya Presidential Palace in the evening.

Victory Day, marked on Aug. 30, was won under the leadership of AtatÃ¼rk. The victory over the Greek military on Aug. 30, 1922 was the last large engagement between the two armies. The war began...