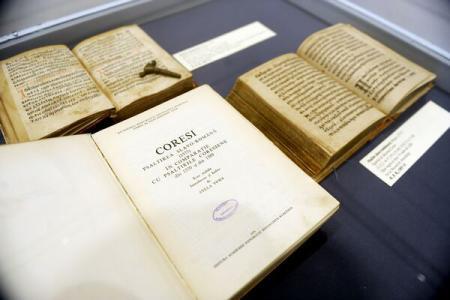 Romanian language is one of the fundamental symbols of national unity, President Traian Basescu's message on the Romanian Language Day reads, as released on Sunday by the Presidential Administration.

The President underlined that Romanians' 'spiritual tradition proves, especially through the Romanian language, that we belong to a space of European civilization."

'I am convinced that as long as we can hand down from one generation to another the richness of Romanian language and the values that consecrated its permanence in the European and world culture we can be proud of our identity and of our joint contribution to the future of the great European family,' the President stated.

He also thanked those who speak Romanian abroad, and congratulated those who elevate it to cultural feats.

Foreign Affairs Minister Titus Corlatean also released a message on the Romanian Language Day, calling it 'an opportunity to mark home and abroad a fundamental element of our identity, and to meditate on the Romanian culture and history, and on the important contribution of Romanian language to the European and universal cultural heritage.'

'I call all Romanians to know and promote proudly their language, history and traditions, which express the solidarity in destiny through which we as a people assert our identity in the world,' Corlatean's message says.

The Parliament voted the Law of Romanian Language Day in 2013; it is also celebrated in the Republic of Moldova since 1990. AGERPRES