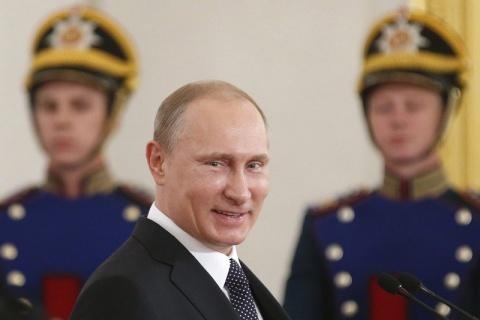 Russian President Vladimir Putin believes that once Power of Siberia is finished, it would be easier to redirect gas supplies from West to East if necessary. Photo by EPA/BGNES

Russian President Vladimir Putin has attended a ceremony to mark the first weld of the Power of Siberia held Monday.

The pipeline will deliver gas to China from Russia's far east.

Putin was quoted by the website Lenta.ru as saying earlier that the project would have a positive impact on the gas supply of Siberia as well and would lead in time to a merger of the country's entire grid into a single network.

In his words, this could also enable Moscow to redirect the flow of gas in accordance to the international environment.

The first amounts of gas are to be pumped into the pipeline in 2019.

China announced it was planning to start its own segment in the first half of 2015 and was hoping it could even become operational earlier than what Russian estimates have pointed, or by 2018.

The Power of Siberia pipeline, a project that had been stalled for ten years, was given a new lease of life at the Russia-China summit in Beijing on May 20 and 21, when a deal on supplies of 38 billion cubic meters of gas to China every year over the next three decades was sealed by the two heads of state, Vladimir Putin and Xi Jingping, respectively.

The historic contract is estimated at USD 400 B.