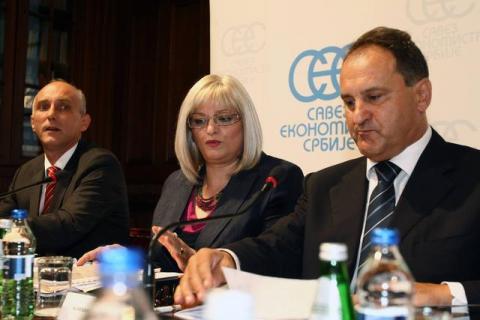 
BELGRADE -- Central bank (NBS) Governor Jorgovanka Tabakovic says the announced electricity price hike "will not result in an increase in inflation outside the target."

The target is four plus/minus 1.5 percent, she explained.

Tabaković said that year-on-year inflation stands at 2.1 percent and, according to the NBS projection that set the electricity price hike at 12 percent, that would "not push inflation outside the targeted band."

At a press conference in the Serbian Association of Economists, the NBS governor said that she also "does not expect that the possible electricity price rise will trigger an increase in food prices by the end of the year."

Energy Minister Aleksandar Antić said earlier on Wednesday that the price of electricity will go up by the end of 2014, but did not specify the exact percentage.

Also on Wednesday, Jorgovanka Tabaković said that after having received a preliminary bank founding permit, Mirabank from the United Arab Emirates will now receive a final operating license and invest USD 5 billion in Serbia over the next three years.

"Their plans are ambitious as they plan to invest five billion dollars over the next three years. However, they do not plan services for the population in the first two years," Tabaković told reporters after a meeting with bankers and economists at the Serbian Association of Economists on Wednesday.

She stressed that the UAE Bank would operate under the rules applied in Serbia.

"Their expectations are high, and ours are real. We will help them like all the other banks to adapt to this market and to make sure that the economy is...