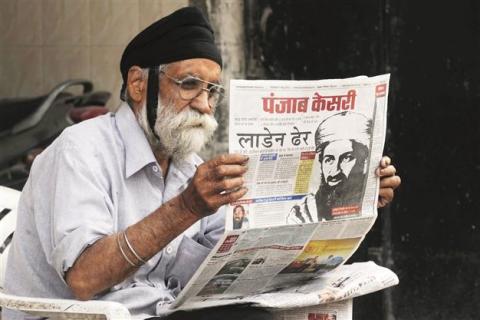 In this 2011 photo an Indian Sikh reads a newspaper displaying front page headlines and photographs of the killing of al-Qaeda leader Bin Laden in Amritsar. Al-Qaeda chief al-Zawahiri launched a new branch of the global extremist movement to reinvigorate and expand its struggle in the Indian sub-continent.

As he set up shop in Kashmir's main city Thursday, Saleem Ahmed had little truck with Al-Qaeda's call to turn India's only Muslim-majority state a key battlefield of a new jihad across South Asia.

"Ours is not an Islamic war for Ummah (a global Islamic nation)," said Ahmed as he laid out his wares on the street by his clothing store in Srinagar's central business district.

"It is a struggle for sovereignty over our land and our political right to self-determination," he told AFP.

In a video message Wednesday by its leader Ayman al-Zawahiri, Al-Qaeda vowed to "raise the flag of jihad" across the sub-continent as it sought to exploit the disillusionment felt by tens of millions of Muslims.

India, Bangladesh and even Sri Lanka have a long history of communal violence, and have spawned several radical Islamist movements such as Indian Mujahedin and the Kashmir-based Hizbul Mujahedin.

But for all the sectarian tensions, experts say most of the region's Muslims are moderate and preoccupied with disparate local issues rather than fighting for a common global cause.

"India's Muslims have their grievances but they are more of a local social, political and economic nature," said Wilson John, senior fellow at the Observer Research Foundation thinktank.          "They are more anxious about their children's education" than waging war against the West, John told AFP.

"They have also generally been part of the political process, they are not isolated, they have their say."
The main flashpoint has been Kashmir where fighting between about a dozen rebel groups and Indian forces has left tens of thousands dead, mostly civilians, since 1989.