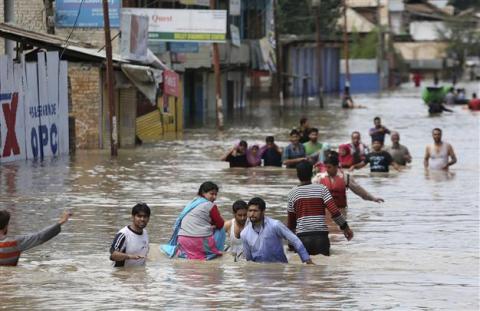 Soldiers were battling Sept. 7 to rescue thousands of people trapped in Indian Kashmir's worst flooding for half a century which has left more than 100 people dead and the main city of Srinagar under water.

Some 350 villages have also been submerged since torrential monsoon rains triggered flooding across the picturesque Himalayan region of Jammu and Kashmir.

Across the border in Pakistan, landslides, flash flooding and house collapses also from days of heavy rain have left another 128 people dead, officials there said.

The Jhelum river, swollen by heavy rain, flooded large parts of Srinagar on Sunday and forced frantic residents onto rooftops, with reports the first floors of a children's hospital and of another hospital were underwater.

"I want to appeal to people not to panic," Jammu and Kashmir state chief minister Omar Abdullah told reporters.

"I know the situation is bad but they should stay above the water level... it may take up to an hour but we will reach them and take them out," he said.

"We are taking all the measures to ensure that we can reach the maximum number of people," he said, adding that 110 people have died in the state so far.

Hundreds of troops, police and other emergency personnel, backed by helicopters and boats, have been deployed across the state to reach those stranded, with 11,000 people rescued so far, officials said.

A police official in Srinagar, a city of 900,000, said he feared the true extent of the devastation was not yet...