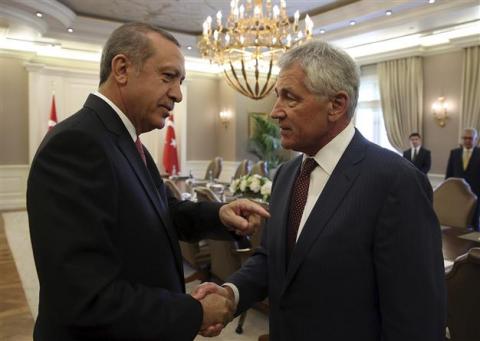 Turkey and the United States have launched talks to discuss potential ways of cooperating against the Islamic State of Iraq and the Levant (ISIL) following a proposal by Washington to form an anti-terror coalition against the rapidly expanding jihadists.

U.S. Secretary of Defense Chuck Hagel met top Turkish officials Sept. 8 to take Ankaraâs pulse on what Turkey can do to take part in the coalition, given the fact that 49 of its citizens are being held hostage at the hands of ISIL.

Hagel first met with Turkeyâs top soldier, Chief of General Staff Gen. Necdet Ãzel, at the military headquarters, before meetings with President Recep Tayyip ErdoÄan, Prime Minister Ahmet DavutoÄlu and Defense Minister Ä°smet YÄ±lmaz. Hagelâs visit was interpreted as a follow-up to ErdoÄanâs meeting with U.S. President Barack Obama on the sidelines of the NATO Summit in Wales last week during which nine NATO countries, including Turkey, as well as Australia, discussed the formation of a core group to âdestroy ISIL.â

Obama will announce Washingtonâs strategy against ISIL on Sept. 10. He called on Sunni countries, like Turkey, Jordan and Saudi Arabia, to participate in the international communityâs efforts to dislodge the jihadists, in an interview with the NBC Sept. 8

âI think that it is absolutely true that weâre going to need Sunni states to step up, not just Saudi Arabia, our partners like Jordan, the United Arab Emirates and Turkey [too]. They need to be involved. This is their neighborhood. The dangers that are posed are â are more directed at them right now than they are us,â Obama told the NBC.

Meanwhile, Turkey appears to have indicated that it would list certain caveats to...