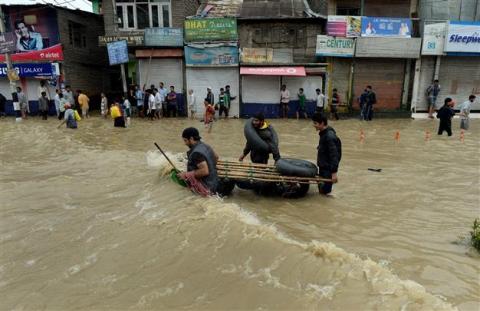 Indian Kashmiri people make their way along a flooded street in Srinagar on September 9, 2014. AFP Photo

Emergency workers battled Tuesday to reach hundreds of thousands of people marooned by floods in India and Pakistan that have claimed more than 400 lives, as anger grew over the speed of the rescue effort.

The army said it was airlifting boats to the worst-hit areas of Indian Kashmir, where whole villages have been submerged and an estimated 400,000 people are stranded in the region's worst flooding for half a century.

"The situation in Kashmir Valley is still very grim, it is quite critical," said Rajesh Kumar, police Inspector General of the Jammu region in India's Jammu and Kashmir state.

"I don't know how many exactly, but there are many stuck in neck-deep water and need help as soon as possible," he told AFP.

But with large parts of the state -- including the capital Srinagar -- underwater, rescuers were struggling to find enough vessels to ferry stranded people to safety.

But many Srinagar residents said they were left to fend for themselves in the fast-flowing floods when rescue workers failed to arrive.

One man was seen hanging precariously from a rope strung from one side of the raging waters to another -- his only way of getting across.

Another, retired college teacher Abdul Latif Rather, said he and his wife had waited hours for help on Sunday as the waters engulfed their home.

Local boys eventually came to their rescue with a makeshift raft and ferried them out to safety.

"They risked their own lives to get us," Rather said as he sat on the...