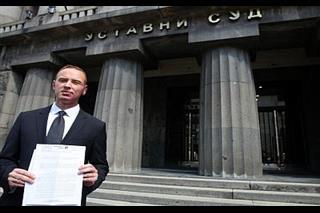 BELGRADE - Vladimir Todoric, a member of the presidency of the opposition Democratic Party (DS), submitted a motion to the Constitutional Court of Serbia on Friday for assessing the constitutionality of the law ratifying the agreement on cooperation between the governments of Serbia and the Unites Arab Emirates (UAE).

The Democrats request that the Court should suspend the implementation of all individual legal documents arising from the agreement pending the final ruling on the constitutionality of the law.

"We want to put an end to the complete sell-off of state resources, which is being done in total contravention of the national legislation and regulations," Todoric said in a statement to reporters.

Asked whether, if the Constitutional Court declared this law unconstitutional, the contracts would be declared null and void, Todoric said that in that case the situation would be resolved in legal and economic terms following the decision.

"It is important that the damage is prevented and reduced to the lowest possible level," he said.

Todoric noted that the law that the DS is challenging envisages the complete circumvention of domestic regulations and national legislation in cases when the government deems it necessary, and stressed that this has been the case with Air Serbia, the sale of agricultural land to the Al Rafaved company, the hotel at Mt. Kopaonik and the Belgrade Waterfront project.

By filing the motion, the DS offered an opportunity to the Constitutional Court to defend the integrity of the state institutions and domestic justice system, as Serbia is not "an emirate of the Serbian Progressive Party (SNS)" (the main party of the ruling coalition, led by Prime Minister Aleksandar Vucic),...