INTERVIEW Valentin Teodosiu: It is worth each taking care of our own Bucharest 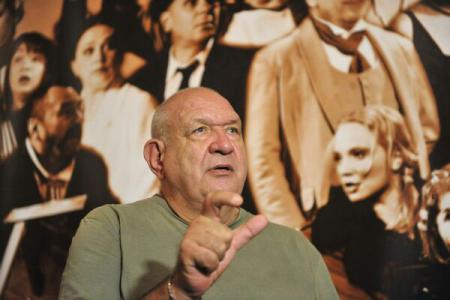 Amidst hammer blows and noises made by workers preparing the Comedy Theatre House for the new season, the actor says he would like everything to change about Bucharest. 'It would be an immense pleasure for me if everything changed so that we may return to the peace and the joy people used to feel: people would walk down Calea Victoriei, in downtown, would greet each other, smile at each other, would remember you and they would know each other; I know it is not possible to return to what used to be,' says the actor.

In an interview to AGERPRES under the 'MY CITY, BUCHAREST' project, actor Valentin Teodosiu talks about the Bucharest of his childhood, calling it 'exceptional,' admitting that he would not move out even if his emotions now are not that high as they used to be back then.

AGERPRES: You were born in Bucharest. What does Bucharest mean to you?
Valentin Teodosiu: It means September 17, 1953. The only thing I can say about the time before is that Stalin died. He died shortly before I was born. Probably there are some sequences. It means the Bucharest of my childhood, it means 153 Plevnei Street, it means the Royal Hippodrome, where every Sunday they would run steeplechase races — I could still hear now the announcers in the kiosk, where the jury would sit, giving out marks: 'Vasile Pinciu, four penalty points!,' 'Zero penalty point!' All day long I would be at the hippodrome; today, you can no longer go there. I do not know what's happening, but nothing is happening because they have not finished the structures.
It means Primary School 153 on Calea Plevnei, near the big church there, it means grades 1 to 7, and also the 8th grade, my first contact with theatre. I was part of a literary-artistic show that won the 1st prize nationwide. It was a big book of history — I wrote about it in my book 'A clown forever.' I have talked about all this in a book that became a bestseller. I want to publish a second revised and enlarged edition. We would come out of a big wooden book that had the words History of Romania written all over it. All characters would come out of it
I had two parts back then: they cast me as Alexandru Ioan Cuza and Vojvode Gelu. I would first appear as Gelu, wearing a wig from the National Theatre House or the Opera...