Arab Countries to Join US Air Strikes against IS 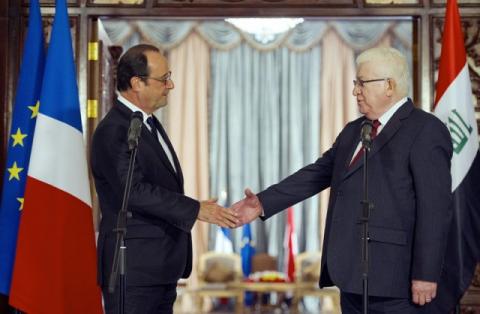 A few Arab countries are ready to offer assistance in the air strikes carried out against the Sunni militants in Iraq and Syria, according to US officials.

It is not yet clear which countries have made the proposal, but a US State Department official was quoted by a number of media outlets as saying their offer also included targets in Syria, even though Washington has for now only vowed there will only be strikes on Iraq.

The announcement came as a number of top diplomats are due to meet in Paris for talks on a strategy to fight insurgents from Islamic State (IS) having seized large swathes of territories in Iraq and Syria.

Some 40 states are to take part in the coalition against the extremists, 10 of them being Arab countries, the BBC reports.

Two days before the US announced it was virtually "in war" with IS, Sunni Arab leaders agreed in Saudi Arabia's Jeddah that their contribution to the campaign might include military intervention.

Egypt, Iraq, Jordan, Lebanon, Bahrain, Kuwait, Oman, Qatar, Saudi Arabia and the United Arab Emirates, which struck the agreement, are likely to attend, but Iran, another key country in the Middle East, has not been invited.

Presidents of France and Iraq, Francois Hollande and Fouad Masoum respectively, are to co-host the event.

The Paris meeting also follows the murder of British humanitarian worker David Haines on Saturday shown in a new IS video where Haines could be heard blaming British Prime Minister David Cameron's decision to join a coalition against the group for his own death.

"I would like to declare that I hold you, David Cameron, entirely responsible for my execution," the victim says prior to being killed.

Ankara to talk with Taliban over Kabul airport