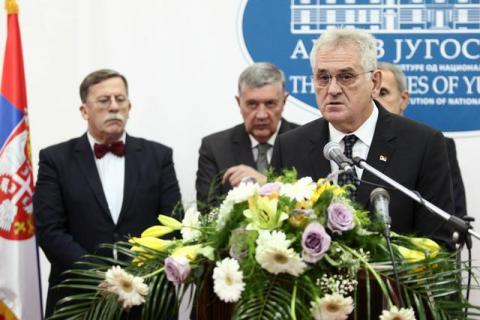 
BELGRADE -- Tomislav Nikolić said at an exhibition dedicated to the Sarajevo assassination that Gavrilo Princip's act "can be understood as the defense of his own country."

"It was a counter attack against a symbol of a monarchy that took away freedom from his country. The trigger on Princip's pistol was the trigger for subjugated nations, but also the trigger of the invaders to start the Great War," the Serbian president said.

He added that the exhibition, "Young Bosnia and the Sarajevo Assassination," was of great importance for understanding the influences and circumstances that led to the war.

"Today, as in the past, great powers impose their value judgments, not only for the future but also in the interpretation of what has been experienced, primarily of historical events," said Nikolić.

The president noted that the organization Young Bosnia ("Mlada Bosna") which carried out the assassination targeting the heir to the throne of Austria-Hungary, Franz Ferdinand, did not follow the "Greater Serbia idea," something confirmed by the very names of the movement's members, that included Muslims and Croats.

The exhibition organized in Belgrade by the Archives of the RS and the Archives of Yugoslavia was opened by the Serb member of the Presidency of Bosnia-Herzegovina, Nebojša Radmanović, and will run through September 30.

While in Belgrade, Radmanović also conferred with Nikolić, and the two official said they were "satisfied with the very good relations between Serbia and Bosnia-Herzegovina - in particular between Serbia and Republika Srpska (RS), pursuant to the Agreement on Special Relations - and expressed the wish that those...