Victor Ponta: I call you to join me in this battle for Romanians' great union 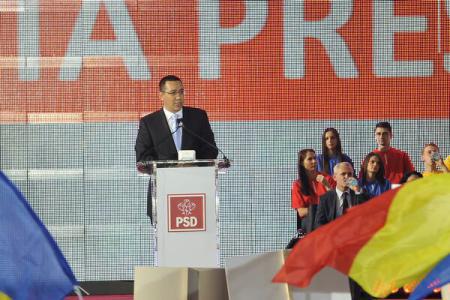 Social Democratic Party (PSD) presidential candidate Victor Ponta on Saturday called all Romanians to join him in what will be the great union, stating there are 55 days until this becomes a reality.

Victor Ponta said he is very proud of his family.

"Like many of you, I am the grandchild of a Romanian who requested Romanian citizenship in 1917 and fought alongside the Romanians for the Great Union. I am the grandson of a priest who taught me that it's important to believe in God, of the Orthodox, Catholics, Muslims ..., but who believes in God is a person caring about other people's needs. I'm the child of parents like yours, who invested everything they had in me and my sisters, and I'm the father of children I want to see growing in Romania, a proud and strong country," the PSD presidential candidate underscored.

Prime Minister Victor Ponta launched his presidential candidacy for Romania Presidency in an event staged at the National Arena in Bucharest.AGERPRES