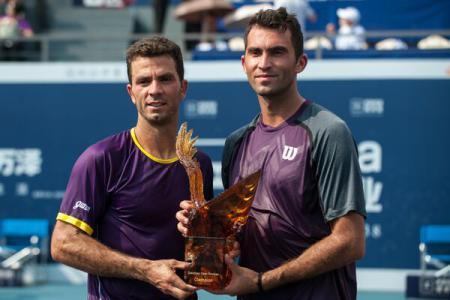 The pair made up of Romanian tennisman Horia Tecau and Dutchman Jean-Julien Rojer has won the doubles' event of the 590,230-dollar ATP tournament in Shenzhen (China), after disposing of Australians Sam Groth/Chris Guccione in the final by 6-4, 7-6 (4).

Tecau and Rojer, main favorites of the tournament, have received a check worth 32.500 dollars and 250 ATP points, while the Australian pair were rewarded with 17,080 dollars and 150 ATP points.

Horia Tecau and Jean-Julien Rojer have captured their sixth title together, all of them conquered this year, after the ones in Zagreb, Casablanca, Bucharest, s-Hertogenbosch, Washington, the pair losing one final in Rotterdam. The two occupy the 8th spot in the Race to London doubles' ranking of 2014, having a considerable chance to qualify for the World Tour Finals.

Tecau has a track record of 22 ATP doubles' titles, being set to try for a 23rd together with Rojer, in the 2,500,470-dollar ATP Beijing tournament next week, where they will square off against Spaniards David Marrero/Fernando Verdasco (seeded third) in the inaugural match.