Demolition of uninhabited homes at Roma camp goes ahead 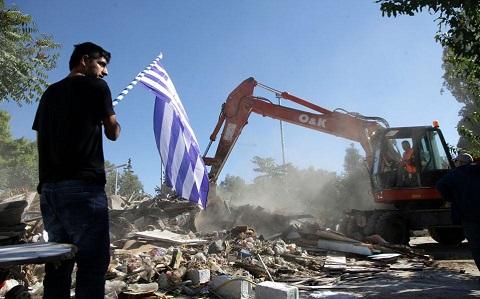 Authorities on Wednesday went ahead with the contentious demolition of 12 uninhabited residences at a Roma camp in the northern Athenian suburb of Halandri but have postponed the relocation of dozens of residents to a new site west of the capital amid reactions.

Residents of the camp, which was established behind the present-day Nomismatokopio metro station over 40 years ago, on Tuesday defied evacuation orders and staged protest action the included roadblocks on Mesogeion Avenue.

The Roma at this particular location are protesting a decision by authorities to have them relocated to a mountain in Megara, west of Athens, arguing that it is too isolated and vulnerable to the elements.

After several meetings between municipal and regional authorities with representatives of the Roma residents, it was decided that the demolition of the 12 uninhabited residences would go ahead on Wednesday morning, but the relocation would be postponed until a more suitable site is found.

Speaking on Skai TV on Wednesday morning, the Interior Ministrys general secretary of decentralized administration, Manolis Angelakas, said that it will take up to two months for the residents of the camp to be relocated.

Halandri Mayor Simos Roussos said that an agreement was reached on Tuesday for the demolition of 12 uninhabited residences with the approval of the community's president, Stelios Kalamiotis, who supervised Wednesday's operation.

The objective, Roussos said, is to "meet the decisions of the courts which have to be executed at the smallest possible cost to the people."

The mayor also said that his intention when backing the Roma protesters on Tuesday and calling for more dialogue was to "avert police intervention, which would have put the Roma...