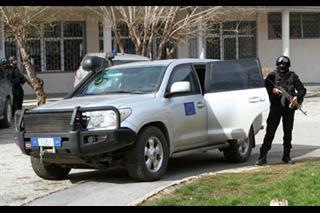 BELGRADE - Serb Radomir Kasalovic, indicted for a murder of a Kosovo police officer in 2011, gave himself in to EULEX police near Zubin Potok in northern Kosovo Tuesday morning.

EULEX said in a release that Kasalovic surrendered voluntarily and was arrested without use of force and taken to a EULEX logistics base, where he will be questioned by an international prosecutor of the Mitrovica Basic Prosecution Office.

Kasalovic is charged with killing Kosovo policeman Enver Zumberi on July 26, 2011, during attempts by the Kosovo police to capture administrative crossings in northern Kosovo.

He is also suspected of attacking the Kosovo police convoy that Zumberi was travelling in at the time of the attack.

A total of six Serbs are charged with involvement in the murder of Zumberi, and international arrest warrants for them were issued shortly after the incident took place.