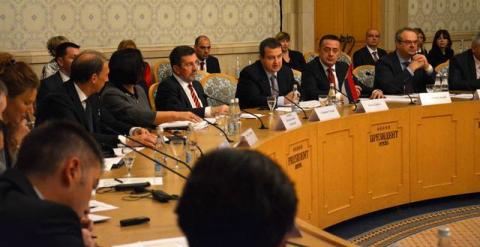 MOSCOW -- Serbia may pay its debt to Russian gas giant Gazprom by giving it a stake in petrochemical company HIP-Petrohemija, Foreign Minister Ivica Dačić has said.

He spoke to reporters in Moscow on Tuesday, the Russian news agency TASS reported.

"We have talked today and agreed to redeem the debt with the help of property, the Petrohemija company in particular," Dačić was quoted as saying.

Gazprom has suggested adding USD 3 to the price of gas it supplies to Serbia to offset its debt.

Serbia also proposed that Russia returns to a tolling model of gas supplies to the country, Dačić said, adding that due to the Ukrainian crisis Serbia asked Russia to find additional possibilities of supplying gas to Serbia.