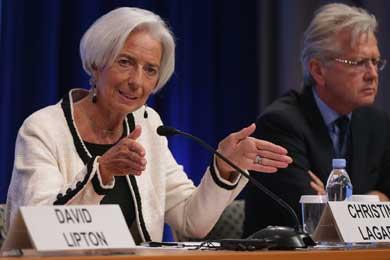 The second phase of talks between Greece and the troika is likely to be tougher than expected after the managing director of the International Monetary Fund, Christine Lagarde, indicated on Thursday that Greece should maintain a lifeline with the Fund even as Prime Minister Antonis Samaras claimed the country can cover its financing needs alone.

Speaking at an annual Fund event in Washington, Lagarde acknowledged the desire of Greek officials for an early exit from its loan program with the European Commission, European Central Bank and IMF, but said the country would still need help. In order to deliver a continuous satisfactory outcome, the country would be, in our view, in a better position if it had precautionary support, she said. So we are talking about evolution in the relationship. But we believe that the relationship can still be extremely helpful for the country to move on.

Her comments came a week after ECB President Mario Draghi said Greece must stay in some form of program if its banks asset-backed securities are to be eligible for the ECBs ABS program.

Lagardes comments also came as Samaras claimed, in an interview with Bloomberg, that Greece can cover its funding needs by tapping bond markets. We feel fully comfortable, Samaras said when asked if the country could cope alone, adding that halting payouts would not be a divorce with creditors. We want to do it properly, he said, noting that Athens is willing to discuss some form of monitoring.

The European arm of Greeces loan program ends in December but the IMFs part is set to continue until the spring of 2016, with some 15 billion euros still to be disbursed. Samaras has proposed however that the IMF program end early with Greece forgoing the pending funding...