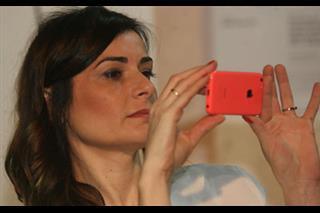 BELGRADE - The play titled "This Grave Is Too Small For Me", by Serbian playwright Biljana Srbljanovic, won two awards at the 54th International Theater Festival MESS in Sarajevo on Monday.

The jury comprising Slovenian actress Natasa Matjasec-Rosker, Carmen Mehnert-Havekost, a German playwright and the program director for performing arts at the Dresden-based production company Hellerau, and Nermin Hamzagic, a director from Bosnia-Herzegovina, granted two awards to "This Grave Is Too Small For Me".

The golden laurel wreath for the best drama in the category 'Balkan (Con) Text' went to Biljana Srbljanovic, and the best performance award to the Sarajevo-based actor Ermin Bravo.

"This Grave Is Too Small For Me" was made in co-production of Hartefakt and Bitef Theatre based in Belgrade, Chamber Theatre 55 and the MESS festival from Sarajevo, Brijuni-based Ulysses Theatre and the production company Testament Films, in cooperation with the Serbian ministry of culture in view of the centenary of the beginning of World War I.

Srbljanovic's latest play is the story about the Assassination at Sarajevo, and implications of that act on general and personal levels, with a focus on the fight for freedom, revolution and youth, reads the festival's announcement.