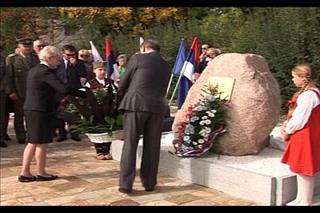 NIS - A ceremony in Nis on Tuesday marked the beginning of construction of a memorial to Soviet soldiers who lost their lives on November 7, 1944 defending the city during World War II.

The monument will be revealed on the Victory Day, May 9, 2015, and the memorial plate at the spot was unveiled on Tuesday by Miodrag Trickovic, a participant in the National Liberation War and chairman of the City Committee of the Association of Veterans in Nis.

The ceremony was attended by a delegation of the Serbian-Russian humanitarian center headed by Viktor Viktorovich Safyanov.

Safyanov thanked Nis on cherishing the memory of the fallen Soviet soldiers, adding that the liberation tradition of two brotherly nations should be continued by young generations that will stand against war and fascism in modern times.

Nis Deputy Mayor Ljubivoje Slavkovic noted that Soviet soldiers gave their lives for the liberation of the city, stressing that there is no greater sacrifice than the one for another people and another country defending the ideals of freedom.

The attack carried out by allied U.S. aircrafts on a column of Soviet soldiers on November 7, 1944 claimed the lives of 23 members of the Soviet Army. The Soviet soldiers put up resistance, and Soviet aircrafts took off from the Nis airport.

The clashes claimed the lives of two Soviet pilots, who were buried in Nis and later their remains were relocated to the Red Army cemetery in Jagodina in 1966.

The book "Air strikes against Nis in WWII 1941-1944" by historian and publicist Dragoljub Z. Mircetic posed a dilemma about the attack of allied aircrafts in the chapter entitled "Confusion or intent".