Intercultural dialogue in the gardens of Kavala's Imaret 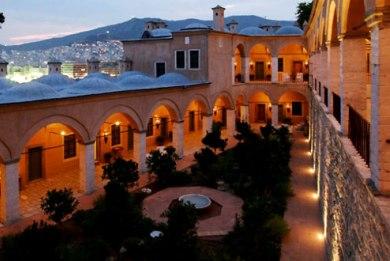 Events such as the international conference titled Aspects of Islamic Gardens: Multi-meanings of Paradise, which was held in Kavala on October 11 and 12, are a major contribution to intercultural dialogue.

The event was attended by both eminent scholars and emerging researchers. The themes of the lectures focused on theoretical and practical aspects related to Muslim gardens in the fields of Quranic and Sufi tradition. They also examined technical issues of the past, the present and the future of these gardens in the various cultural contexts of the Islamic world.

The conference was organized successfully under the auspices of the Mohammed Ali Institute and the Institute of Technology of Eastern Macedonia and Thrace. The conference took place in the hall of Imaret Kavala (www.imaret.gr), which was a complex of religious buildings from the era of Muhammad Ali of Egypt (1769-1849). They have renovated over the last decade and been turned into a luxury hotel and cultural center.

In times of intense geopolitical conflict between East and West in Mesopotamia, the Levant and the Arabian Peninsula there are significant efforts to bridge the East and West culturally for the sake of peace and geopolitical stability. The initiative at Imaret Kavala was groundbreaking by Greek standards and highlights the role of Greece in the Balkans, Eastern Mediterranean and the Middle East, as well as the strength of Greco-Egyptian cultural cooperation.

Greek Phalanx vs. Roman Legion: A history of the most powerful military formations in the ancient world
ForMin Aurescu to participate in FAC meeting on Monday