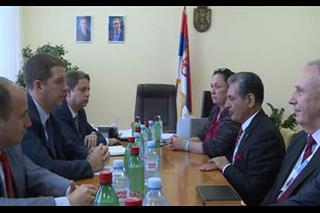 BELGRADE - The director of the Serbian government Office for Kosovo-Metohija Marko Djuric urged Farid Zarif, the head of the UN Mission in Kosovo (UNMIK), on Monday to additionally encourage Kfor, Eulex and the Pristina authorities to ensure security to Serbs in the province.

After a meeting with Zarif, Djuric told reporters that the incidents in the wake of the recent Serbia vs Albania soccer match in Belgrade - targeting Serbs in Kosovo-Metohija, as well as ethnic Albanians in other parts of Serbia - are worthy of every form of condemnation.

"The incidents that have taken place have been condemned by all relevant Serbian institutions - both the incidents targeting the Kosovo-Metohija Serbs and the incidents that we have seen in other parts of our territory, which targeted businesses owned by Albanians who are honest, hard-working and loyal citizens of Serbia," he said.

Djuric also noted that ethnic Albanians deserve that their property be secure and that Serbia, on its part, is "doing and will do everything to ensure that all citizens and their property are protected."

"We expect that the provincial institutions, the international community and all those responsible for security in Kosovo-Metohija do their part of the work..., and that is something we discussed today," he said.

Djuric said that, since Kfor, Eulex and OSCE all operate under UN auspices, he conveyed to Zarif "our expectations that he additionally encourage those who have the authority to ensure security" to the Serbs.

"In order to have completely normal life in Kosovo-Metohija, we must resolve the problem systematically and it is important that the perpetrators of all attacks be caught, but it is equally important to work...