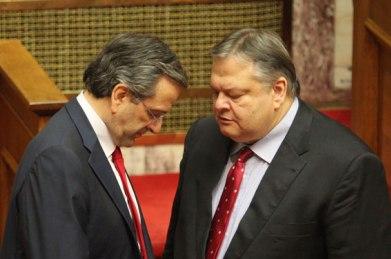 A dispute between New Democracy and PASOK over civil servants salaries continued Tuesday, underlining the big task facing Prime Minister Antonis Samaras and Deputy Prime Minister Evangelos Venizelos as they prepare to meet Wednesday to discuss the governments strategy ahead of the troikas return to Athens.

The coalition leaders are due to meet at Samarass office in the Maximos Mansion at 6 p.m. to examine the outstanding issues that need to be resolved before the inspectors resume their review of the Greek program. This includes deciding what stance the government will take on the biggest issues that need to be settled: pension and labor reform.

The governments preparation for the resumption of the negotiations has been far from ideal. PASOK has chided Administrative Reform Minister Kyriakos Mitsotakis for allegedly failing to consult with the junior coalition partner over changes to the wage structure for civil servants, including lowering the entry-level salary. Mitsotakis, however, insists that this measure is one of Greeces bailout commitments.

Whatever we discuss with the troika has been discussed with PASOKs representatives, said Mitsotakis on Tuesday.

The Socialists, however, continued to deny they had any prior knowledge of the plans.

The Administrative Reform Ministry is moving forward on its own, without having held any discussion with us, said PASOKs Christos Protopappas.

Ceremony held in solidarity with Italy