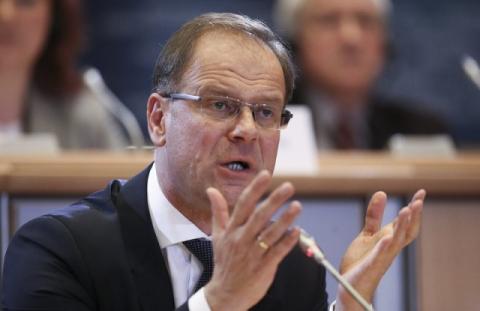 Tibor Navracsics speaks during a hearing by European Parliament in Brussels, Belgium, 01 October 2014. Photo by EPA/BGNES

Hungary's Tibor Navracsics will not be in charge of the citizenship portfolio in the new European Commission, according to Jean-Claude Juncker, President-elect of the new EC.

The decision comes in response to the demands of MEPs to not assign this portfolio to a former member of the government of Viktor Orban, who is directly responsible for the non-observance of civil rights and fundamental freedoms, according to international media outlets, as cited by the Bulgarian National Radio.

Citizenship will be added to the portfolio of Greek Commissioner Dimitris Avramopulos.

"I have decided to place Citizenship under the responsibility of Dimitris Avramopoulos Commissioner in charge of Migration and Home Affairs - issues, very close to the heart of Europe's citizens - who will work in close cooperation on this matter with Justice and Consumers Commissioner Vera Jourova. I wish at the same time to reiterate my confidence and trust in Tibor Navracsics who performed excellently in his hearing and demonstrated a strong European commitment - which is why you considered him qualified as Commissioner," Juncker stated, as cited by the EC press office.

The European Parliament is voting Wednesday on the Juncker commission.

Juncker assured that the vice-presidents would have coordinating functions, without being directors of the others, and that all of the commissioners would be equal

He also announced that he was adding sustainable development to the responsibilities of the First Vice-President, Frans Timmermans, at the request of the EP.