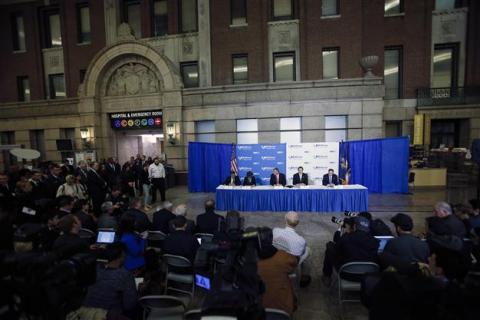 A doctor who recently returned to New York from treating Ebola patients in Guinea tested positive on Oct. 23 for the deadly virus, the first confirmed case in the city, officials said.

The 33-year-old -- identified by US media as Craig Spencer -- has been placed in isolation, in what is the fourth case of Ebola diagnosed in the United States and the first outside Texas.

The patient arrived back in America's largest city at JFK airport on October 17, travelling via Europe, after working with Ebola patients in West Africa for the charity Doctors Without Borders.

According to Spencer's CV on Linked In, he has been a fellow of international emergency medicine at Columbia University - New York Presbyterian Hospital for more than three years.

Officials said he monitored his temperature twice a day and attempted to self-isolate, only displaying symptoms on Thursday, a day after taking two subway trains to Brooklyn to go bowling.

The bowling alley in Williamsburg has since closed as a precaution.

New York City health department detectives have been tracing his movements and officials stressed there was no cause for alarm in the dense city of 8.4 million residents.

His fiancee and two friends, with whom he has been in close contact, are healthy and being quarantined, New York City health commissioner Mary Bassett told the news conference.

One of them was at the Bellevue on Thursday, officials said. Bassett stressed that none of them are displaying...