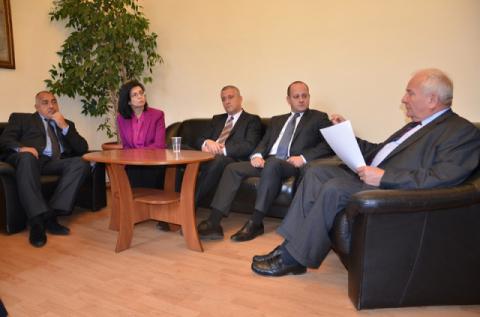 During his visit to the Bulgarian capital on Tuesday Sofia Daul called on political parties to forge a center-right government.

While in Parliament the special guest also held a brief meeting with Parliament Speaker Tsetska Tsacheva.

"I am in Bulgaria to convey the message that the country should have a stable government serving citizens and bringing calm as soon as possible," the Bulgarian National Radio quoted Daul as saying.

Daul stopped short of naming the parties that should enter it, but was explicit nationalist, anti-European formations should not be part.

Leaders of GERB and the RB (the latter represented by the chairs of its three biggest parties) held a closed-door meeting with Daul, refusing to comment afterwards.

Reports suggest Borisov was apparently furious after the consultations.

Both GERB and the RB belong in the EPP Group.

Daul however also met the leaders of Bulgaria's second-largest party BSP (Bulgarian Socialist Party), which earlier vowed to remain in opposition, its newly-emerged rival left-wing Alternative for Bulgarian Revival (ABV), which splintered off the BSP to independently run in elections earlier this year, and the liberal Movement for Rights and Freedoms (DPS).

Borisov was present at all meetings.