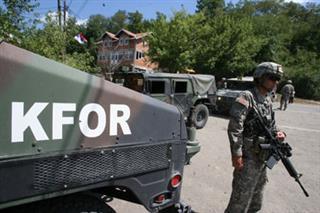 BELGRADE - NATO Secretary General Jens Stoltenberg has expressed confidence that KFOR will remain fully committed to implementing its mandate in keeping with UN Security Council Resolution 1244, acting in the interests of all communities in Kosovo.

According to a release which the Serbian Ministry of Foreign Affairs issued on Friday, Stoltenberg thanked for the greetings that Serbia's First Deputy Prime Minister and Minister of Foreign Affairs Ivica Dacic had sent him on the occasion of his service as NATO secretary general becoming effective on October 1.

Stoltenberg said it was possible to achieve continuous progress in strengthening relations between NATO and Serbia, and cooperation that was being built should also lead to a stronger political dialogue and better understanding, the release said.

The NATO secretary general said that his primary task at his new position would be to ensure timely implementation, by the next NATO Summit took place in Warsaw in 2016, of the decisions made in Wales that would strongly affect not only the future of the alliance, but also its partnerships.

Stoltenberg said he was looking forward to working together with Dacic to further improve the partnership between Serbia and NATO, according to the release.