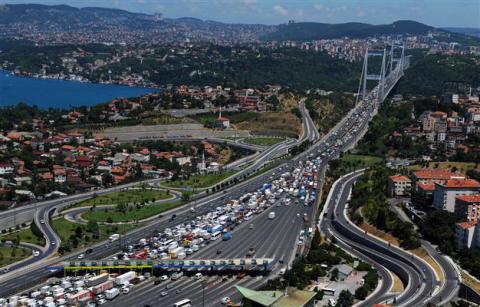 A previous tender to privatize Istanbul bridges and some highways was canceled in February 2013 after President ErdoÄan said it had not met price expectations. DAILY NEWS Photo

Turkey is to revive plans to privatize two bridges across the Bosphorus Strait in Istanbul, along with a number of motorways, and aims to start the process by the first quarter of 2015, banking and government sources said on Nov. 3.

A consortium of Turkeyâs KoÃ§ Holding, Malaysiaâs UEM Group Berhad and GÃ¶zde Private Equity won a first tender for the privatization of roads and bridges with the highest bid of $5.72 billion in December 2012. But the tender was cancelled in February 2013 after then-prime minister Recep Tayyip ErdoÄan said it had not met price expectations.

The Turkish privatization administration (OIB) has sent letters of invitation to potential advisers and is
expected to make a decision by the end of this month, the sources said.

âThe method of privatization will be determined with the adviser,â one of the banking sources told Reuters.

âAfter the cancelation of the first tender, an initial public offering was the leading option, but a transfer of operating rights or regrouping and selling of roads and bridges depending on their revenue are also among the options.â

The roads and bridges, including the Edirne-Istanbul-Ankara motorway and the Bosphorus and Fatih Sultan Mehmet bridges linking Europe and Asia, were to be privatized in a single package for a period of 25 years in the first tender.