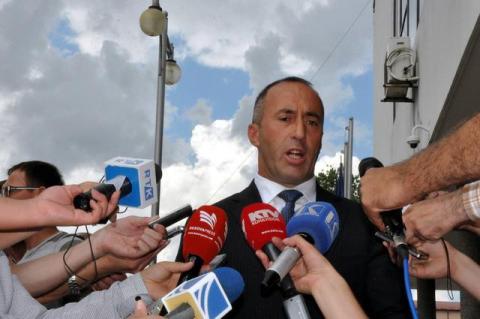 According to the report, the leader of the Alliance for the Future of Kosovo is likely to withdraw his candidacy and thus allow his coalition partner, Isa Mustafa, to be elected to the position. Mustafa heads the Democratic League of Kosovo (LDK).

The newspaper reported that a previous agreement of the opposition coalition will now be "redefined," but that before this happens, the LDK will hold a party meeting to decide on "a new agreement with opposition parties."

The article claims that the LDK's ambitions increased "after some influential western states made it clear that Haradinaj does have their support."

The media in Priština yesterday reported that Hashim Thaci's PDK and the LDK reached an agreement to form government, and that "some foreign ambassadors are satisfied with this outcome because it guarantees a stable majority in the Kosovo parliament."

The EU wants Priština to form institutions so it can make "significant decisions" - establish a special court for KLA crimes and continue the dialogue with Belgrade, "so it is believed that a coalition of the two strongest parties will be the best solution."

The daily quoted its "international sources" as saying it was expected that "the most important issues for the formation of institutions" were expected to be defined in the next two weeks - otherwise President Atifete Jahjaga would have to call early elections.

Juric: We have evidence and photographs that five powerful men abuse children